Jahodná hosts competitions for adults and children, and the littlest ones have fun at the carnival 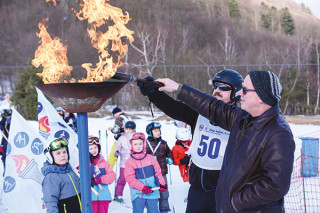 This year's Winter Sports Games for employees of U. S. Steel Košice really owed nothing to the weather. The snow conditions were a total let-down for the cross-country skiers heading for the white tracks up at Kojšovská hoľa on February 1. Even though the games organizers did what they could, they had no remedy for the lack of snow, and the cross-country competitions finally had to be cancelled.

At Jahodná on the other hand, where the other winter sports competitions were planned, things turned out alright. Last Saturday, February 15, the slopes at the ski center filled with dozens of skiers, large and small alike, determined to fight for the best possible placings in their age categories either in giant slalom or snowboarding, and the smallest kids scored points with thier costumes at this year's grand 20th edition of the annual Children's Winter Carnival. It must be said in the end that all the adults and children enjoyed their Saturday to the fullest extent.