Memorandum fulfilled its purpose; both parties want to continue in the cooperation 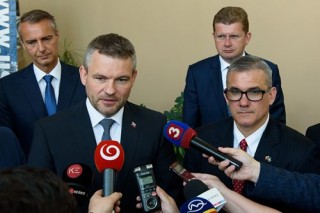 On Thursday, May 03, 2018,  Peter Pellegrini, Prime Minister of Slovakia visited U. S. Steel Košice, accompanied by  Richard Raši, Deputy Prime Minister for Investments and Information, and Peter Žiga, Minister of Economy. During the discussions with USSK Top Management led by U. S. Steel Košice President Scott Buckiso and further members of Top Management, the governmental representatives discussed on mutual cooperation within the   Memorandum of Understanding concluded between the Slovak Government and U. S. Steel in March 2013 and expired after 5 years.

The Prime Minister said that signing the Memorandum was a very good idea. "Today I can state that U.S. Steel Košice is again in very good condition, having passed very successful year 2017, and hiring new workforce. The whole group employs approx. 11.5 – 11.7 thousand people in Košice,“ he said.  He added that they agreed with USSK on the continuation of such meeting on periodical basis. "There are a few tasks ahead of as on both sides that we have to accomplish but I think the dialogues that has been established during the five years should be maintained,“ the Prime Minister stated.  The Prime Minister appreciated that the company invested € 250 million in the new technology during the previous three years. To his words, it is a clear signal that the American investor intends to stay in Košice. Minister of Economy Peter Žiga talked about the efforts to prepare a draft Act on reduction of energy prices for large industrial producers so as they can be competitive within Europe and globally.