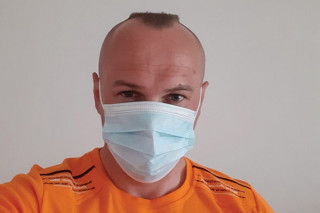 The title of Occupational Safety Champion for the first quarter of this year has been awarded to Jozef Kandra, large-machine mechanic in the Central Ore Transfer plant in the Blast Furnaces Division. And rightly so.

In January of this year he reacted quickly and mindfully in an emergency event which he was witness to. From the cabin of the machine he was operating during his shift, he noticed a truck reversing near the edge of an ore pile, and saw it heel over together with the driver as he was raising the loaded tipper. Mr Kandra called for assistance, and in the meantime he himself went to provide first aid to the driver, who was injured. Another employee from the supplier company joined him at the accident site, and with great presence of mind they together did what was necessary to get inside the truck cab and give first aid to the injured man. Then he was taken care of by our firefighters and paramedics, who arrived very quickly on the accident scene, and after tending to him took him off to hospital. “Anyone else in my place would surely have helped just the same,” said the new Safety Champion on receiving his award, although due to the measures against the spread of coronavirus infection he could not be presented with it in the traditional way, at a meeting in the Main War Room like his predecessors. Instead, his superiors and representatives from the section of GM OSH USSK came together to congratulate him by means of video link.

A new Amendment to the Collective Agreement at U. S. Steel Košice

Chance for students to complement theory with practice