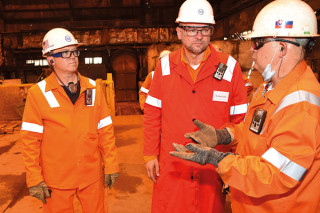 As part of his working schedule in eastern Slovakia on June 29, Deputy Prime Minister and Minister for Trade and Industry Richard Sulík visited the Košice steelworks. His program here consisted of working meetings with Company management and a tour around several divisional plants.

Deputy Premier Sulík met Company President James Bruno and Vice President External Relations, Administration and Business Development Miroslav Kiraľvarga. After the discussions the latter said: “The Minister was interested in the state of the steel industry in Europe and U. S. Steel Košice's position in particular. The President informed him about what U. S. Steel Košice has to do in the coming years in order to remain competitive, as well as about the conditions that need to be established so that the benefits of steel production are not enjoyed only by importers.”

Richard Sulík was accompanied by Vice President Kiraľvarga and Vice President Operations Marcel Novosad on a plant tour taking in several production operations, mainly the steel plant, blast furnace, power generating, hot rolling mill and HDG line 3. He showed keen interest in our production technology, innovations and power requirements, as well as environmental aspects and the costs connected with them. “We appreciate the fact that in addition to the meeting with President Jim Bruno, Minister Sulík undertook the more than two-hour plant tour from raw materials input through product finalizing. This gave us the chance to present our investment plan, which will also meet the demanding environmental targets of the EU,” said Vice President Kiraľvarga, and emphasized: “It is also necessary for the Government to create conditions in which we will not be at a disadvantage with regard to producers outside the EU. If we look back over recent years, we see line after line being switched off across Europe, while in China they're breaking one production record after another.”

Members of SR National Council in talks with U. S. Steel Košice management