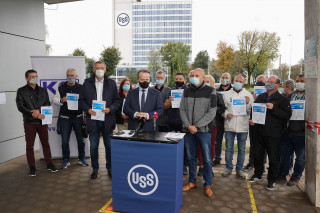 On that day, various events, demonstrations, press conferences, and joint declarations by steelmakers were aimed at highlighting the issues that this segment is struggling with nowadays.

Representatives of the steel industry across the whole of Europe called on the EU leaders, national governments and steelmaking companies to promptly adopt measures aimed at protecting the entire industry and maintaining jobs in this sector.

The campaign was organized under auspices of IndustriAll - Europe,  the association of European labor union organizations, and in Slovakia by the KOVO Labor Union organization.

Juraj Varga, chairman of the KOVO U. S. Steel Košice Labor Union Council stated at the briefing:  “The European steelmaking industry has been facing serious problems for a long time, especially caused by cheap steel and steel products imported from third countries. Steelmakers in these countries don´t have to meet the strict environmental requirements enforced in the EU countries. The COVID-19 pandemic has deepened this crisis even further, causing demand for steel products from automotive, construction and other industries to drop by 50%.  Thousands of workers have lost their jobs, and this could have irreversible consequences for them.

The situation in our biggest steelmaking company, U. S. Steel Košice, is very similar.  One of our three blast furnaces has been idle since June 2019.  Employees of USSK already had to work in the reduced weekly working time mode for the final five months of last year. Since the beginning of 2020, we have been continuously working in this mode for the ninth month in a row. We are afraid of losing even more jobs, which would directly affect people living in this region since it is much harder to find a job in eastern Slovakia, and potential job losses are perceived especially sensitively. For these reasons, in the name of KOVO U. S. Steel Košice Labor Union Council, I am calling up support for the protection of the European steel industry and also support for employees of U. S. Steel Košice and its subsidiaries, who we also represent as a union organization. We would like to jointly put pressure on the EU Commission to find adequate solutions to this problem.”

Employers appreciate this activity by the union organizations. U. S. Steel Košice Vice President Miroslav Kiraľvarga attended the briefing and spoke in support of the unions:  “I would like to thank our partners for joining in this IndustriAll activity. At this time we jointly emphasize the importance of steel for Europe, everywhere where steel is being made in the EU .  Despite the global steelmaking overcapacity of 500 – 600 million tons compared to the total steel consumption of 1 . 6 – 1 . 8 bn tons, China and other Asian countries produce more and more steel every year, while at the same time steelmaking companies in Europe are having to reduce their production.  More steel has been imported into the European market than exported from European steelmaking regions.  The European association of steelmakers seems to have been pushed out of the European market. Legislation enacted by the EU Commission and directed at the so-called green economy applies only to steelmakers within the EU. This legislation has increased steel production costs in Europe and it results in our losing competitiveness towards non - EU steelmakers. The EC representatives are well aware of insufficient control of imports into the EU markets, however they still fail to adopt appropriate measures to implement high enough surcharges and tariffs on imported steel.

I therefore greatly appreciate this activity, and the fact that our colleagues and labor union partners have joined this Europe -wide activity of the union associations .  This is another example of how the EU member countries and workers in the steelmaking industry here demand that steel consumed in Europe be also made in Europe, and also 100% recycled here on this continent.”

Innovation opens up new opportunities for us and promotes customer satisfaction