Let's hit the road with the "Dopraváčik" road safety playground 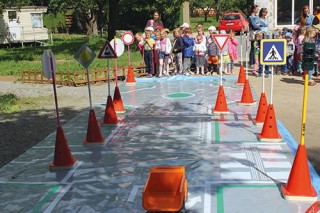 In the past we used to have a well-functioning system of road safety education for preschoolers and elementary school students. Many kindergarten or elementary schools had their own road safety playgrounds, where children could practice close-to-real situations in traffic. Unfortunately, the situation today is different, for there are only a few functioning road safety playgrounds left, and new ones are very rare. Although statistics confirm that there are still a lot of road accidents caused by children.

Recently the "Barlička" (gimp stick) civic association came up with an idea to restore the tradition of road safety education for children in Prešov and the vicinity. They also want to involve volunteer road safety assistants in this process. They successfully  presented the "Safe roads, safe return home" project in the grant program named "Together For The Region", which is promoted every year by U. S. Steel Košice and the Carpathian Foundation. They used the obtained financial resources to create a mobile road safety playground, named "Dopraváčik" in Slovak.

"We started creating the playground back in March. We did the landscaping ourselves with the help of civic association employees. The mobile playground was manufactured by a private company and we also cooperated with a driving school, where our young assistants from a youth community center were trained," says Lenka Eliášová, Pedagogics Specialist, about the carried out work, who was also the Head Coordinator of the project.

The mobile road safety playground is located in the civic association's community garden at #13 Matice slovenskej Street in Prešov. It is made of tent canvas and consists of a portable set of intersections with indicated zebra crossing, roundabout, railroad crossing, and main and minor roads. The playground also includes ten big road signs placed on cones, and traffic lights.  The civic association also bought bouncing balls, scooters, guards, hi-viz vests, hard hats, simulators, and other accessories. The advantage of this playground is its flexibility. Since it is a mobile playground, it is easy to assemble and disassemble, and it is usable indoors and outdoors.

The road safety playground was completely finished this month and its grand opening was held on June 6. "The opening was cheerful with great expectations, and it was hard to tell who was more excited, whether we employees or the children. Besides the civic association members, company and driving school representatives who participated in this project were also present at the opening. Kids from the Kindergarten of Queen of Peace of Medjugorje in Prešov and students of the Private Vocational School were the first who tried this playground,"  says Lenka Eliášová about the course of the grand opening.

Scott Buckiso thanks the organisers