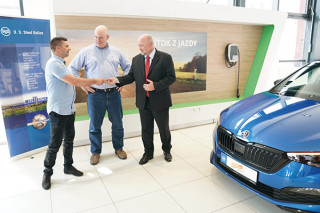 On Monday Peter Szemán became the owner of the second automobile in the series making up USSK’s Great Competition. In his case it was actually Company President Jim Bruno who brought him luck during the draw, which took place on Friday morning last week. Jim Bruno also drew the winner of a KORAD voucher worth 800 €, namely Ondrej Laczko, and two winners of HC Košice season tickets, Attila Halász and Juraj Gedeon.

The winners of the FRESH vouchers and the promo packages were drawn by KOVO Labor Union representative Peter Kovaľ. The draw procedure was of course monitored and then approved by a notary. We talked to Peter Szemán by phone on Friday, not long after he had been told the great news right after the draw itself by USSK Public Affairs Director Ján Bača.

“It was early morning still, and I was just going to bed after my night shift,” said Peter Szemán, and added: “In fact I didn’t want to take the call at first, because I didn’t recognize the number. It’s a good thing I did though, isn’t it.” After that the happy winner didn’t get much sleep on Friday. First he had to tell his wife the good news, who initially didn’t believe him, then his little daughters, the rest of the family, and then his friends. “I’ve never won anything in my life, and I really never thought I might have this kind of luck. I’ve been taking part in the Great Competition since the beginning, and now look at this surprise,” he commented.

Peter Szemán works as a packer in the Tin Mill branch of the Shipping Division. His family’s vehicle fleet consists of a 17-year-old Škoda Fabia and a 7-year-old Volvo, so the brand-new Škoda Scala with its excellent equipment and beautiful color is sure to please the whole family.

The car was officially handed over on Monday in the show-room of one of the Košice Škoda sales centers. The keys were presented to the new owner by USSK President Jim Bruno, Vice President Július Lang and a guest from Škoda Auto Slovensko, country sales manager Jan Procházka, who traveled to Košice specially for this grand occasion. After handing over the keys, they traditionally wished the new owner satisfaction and enjoyment with the car, and many kilometers happily driven without accident.

Volunteers do not hesitate for a moment